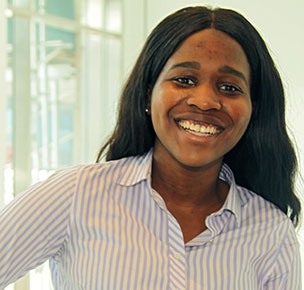 With Forté’s network behind her, economics major Ariel Leachman is realizing her American dream. From first-generation student to real estate investment management, Ariel’s connections are powering her career.

With Forté’s network behind her, economics major Ariel Leachman is realizing her American dream.

Her single mom emigrated from Jamaica to build a better life for herself and Ariel in New York. Since then, Ariel has sought out opportunities to create her best future — including getting scholarship support for high school, benefitting from a cultural immersion trip to Europe, and taking pre-college courses at some of her top university picks.

“My mom pushed me to take hold of amazing opportunities in the United States,” Ariel said. “That included taking Saturday classes during elementary school and taking advantage of nonprofit programs that gave me better chances to attend university—because many people in my situation and neighborhood didn’t make it into college.”

Forté is in tune with and invested in what needs to be done, like its focus on the new conference for Women of Color. The organization is always evolving and recognizes where it should do outreach and purposefully fill the gaps.

Finding her way at Barnard

At Barnard College, a pre-college gender class launched her thinking about her own identity and struggles as a first-generation student and black woman today. As a freshman in groups like Smart Women Securities, she helped drive conversations about challenges women face in the workplace and creating more equality in the business world.

While selling ads for her college newspaper, she discovered Forté and its powerful network for women. Since joining, she has built her leadership skills and made important career connections.

Forté’s conferences linked her with peers and pros that shaped her career and focused her interest in evaluating investments.

At Forté’s College Fast Track to Finance Conference, she met peers from other universities majoring in finance and built up her financial acumen. She also accepted an invitation for a hands-on experience with the Bloomberg electronic trading platform that is used to monitor market data and make trades.

“Coming from a liberal arts institution like Barnard, it was important for me to get well-versed in the language of finance and be able to speak more eloquently about it,” Ariel said. “Women mentors at Jefferies (a financial services company) invited me to learn the Bloomberg terminal. I was able to take initiative and learn applications relevant to the industry.”

At Forté’s Liberal Arts to Business Leadership Conference, Ariel met a managing director at Bank of America who gave her the scoop on working there just before she started a summer analyst internship.

“That provided me with another way to connect with her outside of Bank of America,” Ariel said. “Through Forté, I’ve gained a huge network, support and a push to move forward. I know that I have people in my corner,” she continued.

I’ve gained a huge network, support and a push to move forward. I know that I have people in my corner.

Inspiring others through Forté

At Forté’s Executive Women’s Salon, Ariel shared her experience and held her own in a room packed with top businesswomen.

“My Forté experiences influenced my speaking up on campus, speaking up in the classroom and presenting in front of very accomplished people, not just my peers,” she said. “Those experiences are helping me now with my manager and being able to express my opinions and point of view in a very mature way.”

“Artemis doesn’t usually recruit undergrads,” Ariel said. “But after working in the D.C. office in an enrichment internship, I showed them that I could be a hard worker. Now I’m focused on being the best in this role for this industry.” 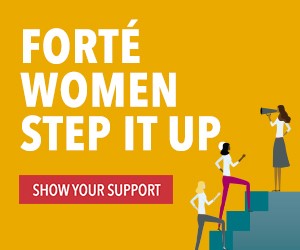