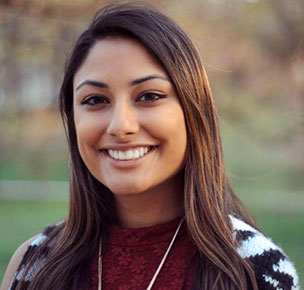 That all changed when she met women role models at Forté who taught her why her voice mattered.

After she attended a Forté conference, everything changed. She returned to the University of Maryland with renewed confidence and added information systems to her major. Then she landed a selective internship with finance information and media giant Bloomberg, where she positioned herself for a full-time role as a market data analyst.

At the College Fast Track to Finance Conference, a J.P. Morgan analyst coached Simran’s team on how to pitch stocks during a conference-wide simulation.

“I didn't know what managing a portfolio meant,” Simran said. “That's when I got more interested in finance, because I realized it was more than just reading numbers. It had an analysis aspect to it, which I enjoyed.”

It was the pivotal moment Simran realized financial analysis could be a real career path for her.

“I was intimidated because I thought the finance world was a very male-dominated field and the culture at Big Four accounting firms would expect you to know everything,” Simran said. “Having the coaches at the conference — all representatives from those big companies — made me feel comfortable going into this field and not holding back because I am female.”

I'm seeing a lot of women in higher roles. So I've seen that as a possibility for myself, whereas I didn't see it before.

Digging into her Forté network

When she met a Bloomberg recruiter on campus, Simran jumped at the opportunity to ask how she could build her investment management experience. She and the recruiter made a steadfast connection when they discovered they were both Forté members.

“We got into a 15-minute conversation about Forté and both found that we were going to the same conference in Chicago,” Simran said.

At the College to Business Leadership Conference, Simran reconnected with the recruiter, who was serving as a coach at the event. The conference gave her valuable face-time to discuss her recent Bloomberg externship application.

“I’d heard all these stories about how Forté would help build career connections, but I didn’t really understand that until I made my connection with the Bloomberg recruiter,” Simran said. “Being part of Forté definitely had an impact on my application review because people at Bloomberg already knew who I was.”

What Forté does best is calling out where change needs to happen.

Set up for success

As a sophomore, Simran’s Bloomberg externship gave her a three-day introduction to the company, a crash course on the financial data platform Bloomberg Terminal, connections with industry experts, and an opportunity to secure a summer internship.

Then she spent the summer before her senior year improving the ways Bloomberg represents data to clients. It was the experience she needed to snare a full-time position as a marketing data analyst.

“By the time I got to Bloomberg, I was comfortable asking questions without being fearful,” Simran said. “Through Forté, I learned that you won’t get anything done if you’re not curious and don’t ask questions about what you don’t know. Forté really helped me be more vocal, and I realized that Bloomberg wouldn’t have hired me if they didn’t want to hear my voice.” 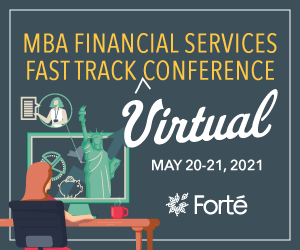